Can Germany’s ‘gesture’ heal the wounds of genocide? 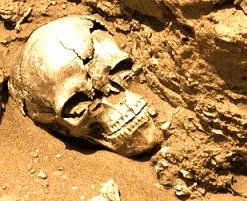 The reconciliation “gesture” Germany has just agreed to make in an effort to satisfy its “political and moral obligations” for the first genocide of the 20th century is totally political but hardly moral, according to critics of the deal hashed out over the past six years in negotiations between German and Namibian government officials.

The deal calls for German President Frank-Walter Steinmeier to visit Windhoek, the Namibian capital, to apologize and ask forgiveness for the German slaughter of 85% of the Herero nation and half of the Nama nation in the 1904-08 genocide. (That genocide is portrayed in the novel, Mama Namibia, which is based on the true story of a young Herero girl who survived alone in the Kalahari Desert for two years after her family was killed in a German ambush at a waterhole.)

Until recently, German officials had refused to recognize their country’s actions in German South-West Africa as genocide because the term wasn’t legally defined until the 1940s. However, those same officials freely referenced the Armenian Massacre of 1915 as a genocide.

The apology Steinmeier makes will be carefully worded and vetted so as to avoid admitting a crime that would open the door to litigation for reparations and to setting a precedent that would lead to demands from other former German colonies.

Rather than reparations, Germany committed to giving Namibia €1.1 billion (US$1.3 billion) over the next 30 years to fund infrastructure and development projects. That’s to be in addition to the €11.5 million Germany currently gives Namibia each year in development aid.

It’s considerably more than Germany’s initial €10 million (US$11.7 million) offer that Namibian leaders rejected in December. And it’s more than the €870 million Germany has given its former colony in aid over the past 30 years. However, it’s just a fraction of the $12.5 billion in aid the U.S. – which played no part in the genocide or the colonization of the region – has given to Namibia over the past 20 years.

Most of the new aid from Germany is to go toward Namibian projects related to land reform, rural infrastructure, water supply and professional training. The need for such projects is great, especially in rural Herero and Nama communities that have been all but forgotten by the government.

The plan calls for Herero and Nama communities to be involved in developing specific projects. But those communities are a minority in Namibia due to the continuing effects of the genocide. Thus, some critics are concerned that the Namibian government will use the funding to benefit other communities and businesses owned by politicians or influential members of the majority tribe, which was not targeted by the genocide.

About €50 million of the aid is to be used to establish a foundation for reconciliation between Germany and Namibia. The foundation is to sponsor cultural projects and youth exchange programs. It would be good if it included education programs about the genocide, which has been all but ignored in Namibian textbooks, at least until recently.

As another part of the deal, Germany is to return the rest of the Nama and Herero remains being held in its universities and museums.

Hundreds, if not thousands, of skulls and bones were sent to Germany during the genocide for “scientific” experiments intended to prove the superiority of the German race.

Those eugenics studies and the medical experiments German doctors conducted on the Herero and Nama imprisoned in concentration camps paved the way for similar experiments and justification of the Holocaust, especially since the rest of the world ignored what the Germans did in South-West Africa. Germany has returned some of the stolen remains over the past decade, but a much larger effort will be needed to return the bones to their ancestral land.