A tribute at the Waterberg 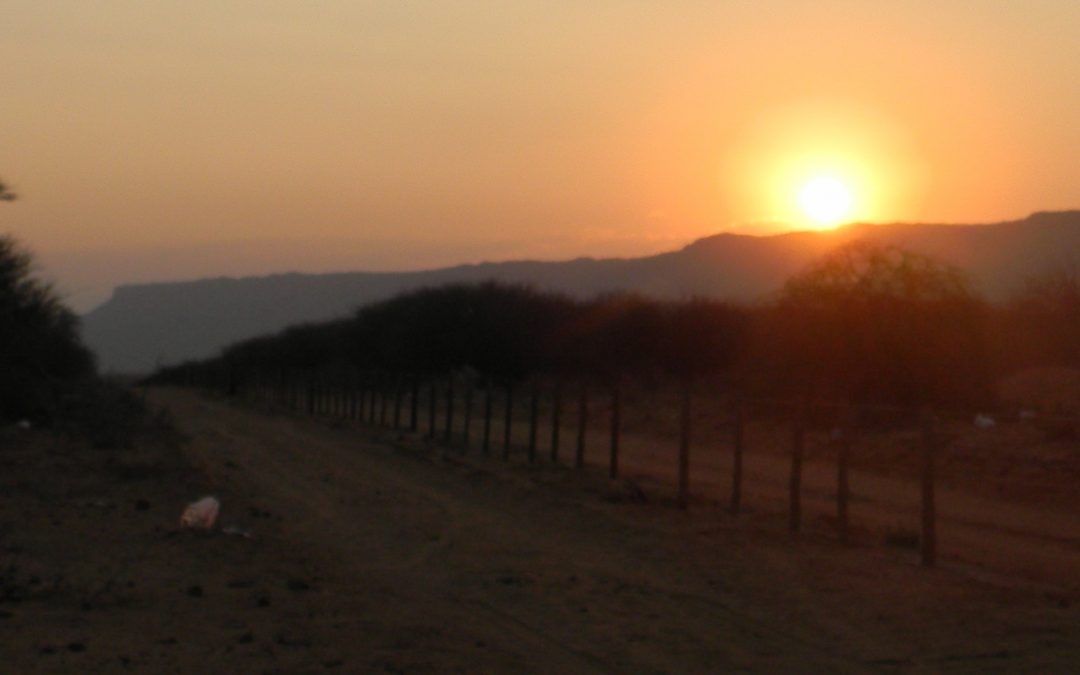 The Waterberg. A beautiful, rugged table mountain rising up out of a plateau that shares its name.

Today, it is home to a national park in Namibia, private game reserves and guest farms. But for the Herero, the Waterberg will be forever linked to that fateful August day 113 years ago when their grandparents and great-grandparents were killed in the shadow of the mountain in what was the beginning of the first genocide of the 20th century. For them, the Waterberg is a place of courageous sacrifice.

In 1904, after pushing the Herero into “rebellion,” German soldiers went from village to village killing every Herero they found. The Herero had no choice but to run. They took their cattle and fled to the Waterberg with Chief Samuel Maharero, thinking that by distancing themselves from the soldiers and settlers for a while, life could return to “normal.”

But they didn’t understand the imperial attitudes driving the German troops. What they had expected to be a brief encampment beneath the Waterberg stretched into months. The land around the Waterberg was too arid to support all the Herero and their cattle for any length of time. The waterholes went dry and food became scarcer and scarcer.

Meanwhile, the German soldiers and their big guns were pressing ever closer to the Waterberg. By early August, the troops were within a few days’ march. The only escape was into the desert.

To give the Herero time to escape, Maharero and all the men prepared to fight. But some were too weakened by hunger and thirst. Several mothers with babies gave what milk they had to the warriors, sacrificing their infants so the rest of the Herero nation could have a chance at life.

From the moment Mama Namibia was published, I felt the need to bury a copy of the book at the Waterberg as my personal memorial to the Herero who gave their lives there. When I told Tate (Chief Kuaima Riruako) of my desire, he made the arrangements and timed it so we’d arrive right before sunset – that mystical moment when yesterday touches tomorrow.

We followed our escort down the long gravel road leading to the entrance of the Waterberg Park. Instead of pulling into the park, the truck ahead of us turned onto a narrow sandy road running parallel to the mountain. The road was bounded on one side by the thorny brush of the veld. On the other, a fence and an identical trail marked the boundary of the park.

As the sun touched the crest of the plateau, our escort pulled off the sand track. We all piled out of the pickup trucks, and the men gathered their shovels. Tate told Job and me to stay behind until he called for us.

A few minutes later, he summoned us. Moving toward Tate’s voice, I clutched a copy of Mama Namibia in one hand as I awkwardly tried to keep my long red Herero dress from dragging on the ground or catching on thorns.

When we joined the others, the men were digging a small hole at the base of a V-shaped tree. Tate put a dried cow chip in the hole along with the book, in which I had written a private tribute to the genocide victims. Tate silently mouthed a prayer and then stepped away as the other men shoveled dirt over the book. 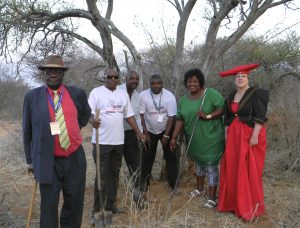 As we walked back toward the vehicles, one of the men told me this is where the Herero were buried. The park is for the German soldiers, he said. He pointed out a small brick wall almost concealed by shrubs; it’s the final resting place for many of the Herero whose bones had been collected from the battlefield over the years. 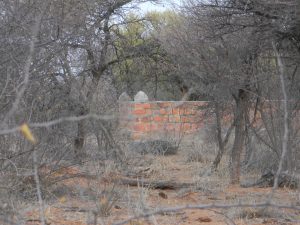 As we drove away from the park, Tate and I sat in the back seat – he was on the left, behind Job, while I sat behind Longman, our driver, on the right. Tate explained that he had Job and me wait at the truck while he asked the ancestors’ permission to bury the book and their guidance on where to bury it. He said the ancestors welcomed the book because it would help lead to forgiveness and healing.

We had almost left the Waterberg area when we saw a magnificent male kudu, a sacred animal for the Herero, at the left side of the road. It made no attempt to run or cross the road — the usual action of a kudu encountering a vehicle. Instead, it stood still, almost like an honor guard. We had no sooner commented on it when we saw another male kudu on the same side of the road. It, too, appeared to be saluting us with its proud, solemn stance. And right across the road, on my side, a female kudu stood just as solemnly, watching as we slowly passed.

Tate smiled, patting my hand as he leaned toward me. “It is the ancestors’ blessing,” he said quietly.